Drake Baskets is a whole-family affair! Meet some of our top weavers! 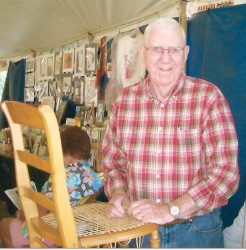 Ed is the foundation of Drake Baskets. He started caning in about 1967 after taking a class at the YWCA in Elgin. He wanted to learn how to cane because he had purchased several old caned chairs from a local auction, and wanted to restore them himself. In about 1986, he took a basket-weaving class at the Kishwaukee Valley Heritage Museum with his daughter Emily. Together, they started weaving baskets to sell at local craft shows. They also began teaching other family members the art, and Drake Baskets was born. His philosophy was that baskets should be used, so most of his basket creations were sturdy, simple, and useful. Ed caned chairs for local people, and likely recaned over a thousand chairs in his lifetime. He also continued to weave baskets until just a few days before he passed away in August 2010. Since 2010, our baskets have been made in his memory. 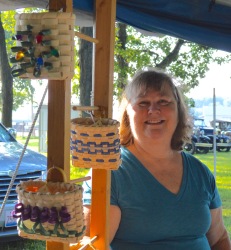 As Ed’s daughter, Emily is the current cornerstone of Drake Baskets. She learned how to weave by attending a class at the Kishwaukee Valley Heritage Museum with her father, Ed. After perfecting their skills on baskets for themselves, she was encouraged to sell some of them at local craft shows. Her basket philosophy builds upon her father’s, in that baskets should be useful, but can also be beautiful. She likes to decorate our baskets with colorful reed, unique patterns, and creative decorations. She also continues to teach others how to weave baskets and cane chairs. 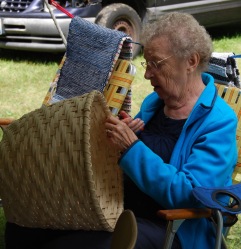 Millie played an important supporting role in Drake Baskets. She put many of the final touches on our baskets. She would cut and prepare all the basket tags, and would often inspect the baskets for quality control. She would also trim the basket “fuzz” (which develops as you are weaving) before the baskets could be put out for sale. She was also skilled at sewing, and enjoyed crafting snowmen, ornaments, porcelain dolls, or other crafts for the Christmas Craft Walk. Since 2015, our baskets have been made in her memory. 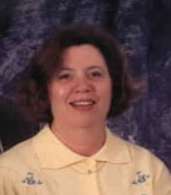 Pat picked up the art of basketweaving from her father and her sister. In 1997, she and Emily began hosting their own open house at the Christmas Craft Walk at her house in Kingston. It was moved to Emily’s house in 2008. Pat especially liked adding creative decorations to our baskets, such as unique rims, decorative buttons, and reed flowers. Since her unexpected death in 1998, our baskets have been made in her memory. 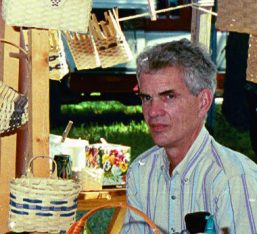 George first learned chair caning from his father-in-law, Ed in the 1970s. He and Ed would demonstrate chair caning at various local shows. When the family started basket weaving, in addition to weaving, George developed a dye from the abundant black walnuts on the property at Walnut Acres. For a few years, he also made a special butternut dye. He also made his now-famous George’s Gourmet Bean Soup for the Christmas Craft Walk! Since 2018, our baskets have been made in his memory. 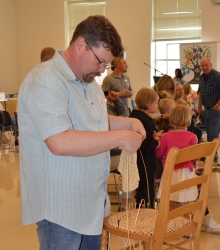 Gef is a proficient chair caner, and learned how to cane from his grandfather and his father when he was a teen. He started demonstrating at Okawville Heritage Days in the 80’s and continues to share this old craft with others at the Sycamore Steam Power Show. He loves to chat with onlookers about the process of caning a chair! 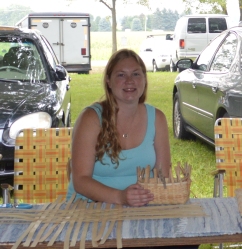 Edwina learned the art of basket-weaving when she was young from her mom, Pat, and her grandfather, Ed. She likes to do the weaving on the sides of baskets, and likes making baskets with extra decorations on them. You can see her demonstrating weaving at the Threshing Bee, and at the Christmas Craft Walk, she will be handing out samples of George’s Bean Soup! 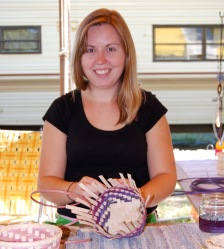 Like her cousins, Eva first started helping with baskets when she was young, and started by trimming the “fuzz” off of the baskets when they were finished. She learned how to weave a few years later. Ed taught her how to cane when she was a teenager. Today, she likes to design uniquely patterned and colored baskets, and especially enjoys using the herringbone weave. You’ll see her demonstrating basket weaving at our various shows, helping to teach basket weaving classes, and helping out at the Christmas Craft Walk! 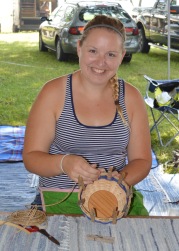 Becca started weaving baskets when she was quite young, and began with small baskets called “Becca’s Berry Baskets.” She soon graduated to larger baskets of all kinds. When she was in middle school, she completed a large school project about chair caning. She also learned how to cane chairs from Ed for that project, and together they made the “Seven Steps of Chair Caning” samples that are shown every year for chair caning demonstrations. Ed and Becca also wrote a how-to manual for chair caning that is still used today. 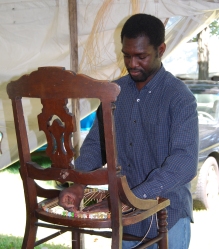 Lynnaun learned the art of basket weaving from his wife, Eva, shortly after they started dating. He purchased his first caned chair at the Steam Power Show in 2010, and has patiently learned how to cane by practicing on his own chair. He especially enjoys weaving baskets as gifts for family and friends. He is often seen demonstrating chair caning at the Steam Power Show. 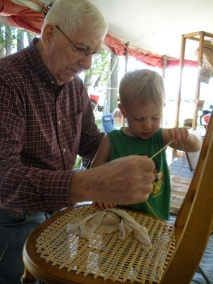 Trey is the first of the fourth generation to learn basket weaving and chair caning. He first helped with chair caning when he was still very young. He has since learned how to weave baskets, and has completed his very first basket on his own. We look forward to the baskets that he will design in the future!